It’s easy to forget now, but Amazon wasn’t always the king of online shopping. In the fall of 2004, Jeff Bezos’s company was still mostly selling just books and DVDs.

That same year, Amazon was under siege from multiple sides. Some of its biggest competitors were brick-and-mortar chains like Best Buy, which was still in expansion mode at the time, with sales growing 17 percent annually. Toys ‘R’ Us sued Amazon in a high-profile battle, alleging it had violated an agreement the two companies had for the toy store chain to be an exclusive seller on Amazon.com.

And during the holiday season, Amazon’s website suffered repeated outages, drawing the wrath of customers and the press alike.

Amazon was worth $18 billion at the time. Its online rival eBay, on the other hand, was an internet darling worth nearly $33 billion. If you were an outsider to both companies and you had to pick one as the future Everything Store, it might have been hard to imagine Amazon as the victor.

But 15 years later, Amazon is worth more than $900 billion, compared to just $33 billion for its old foe eBay, which spun off its (more valuable) payment division, PayPal. And the Amazon Prime membership program is perhaps the biggest reason why.

The service, which launched in February of 2005, was a first of its kind: For an upfront payment of $79, customers were rewarded with all-you-can-eat two-day delivery on their orders. At the time, Amazon charged customers $9.48 for two-day delivery, meaning if you placed just nine of these orders in a year, Prime would pay for itself.

“[E]ven for people who can afford second-day shipping, this feels sort of like an indulgent luxury,” Bezos said of Prime, on a call with Wall Street analysts when he introduced the service in February 2005. 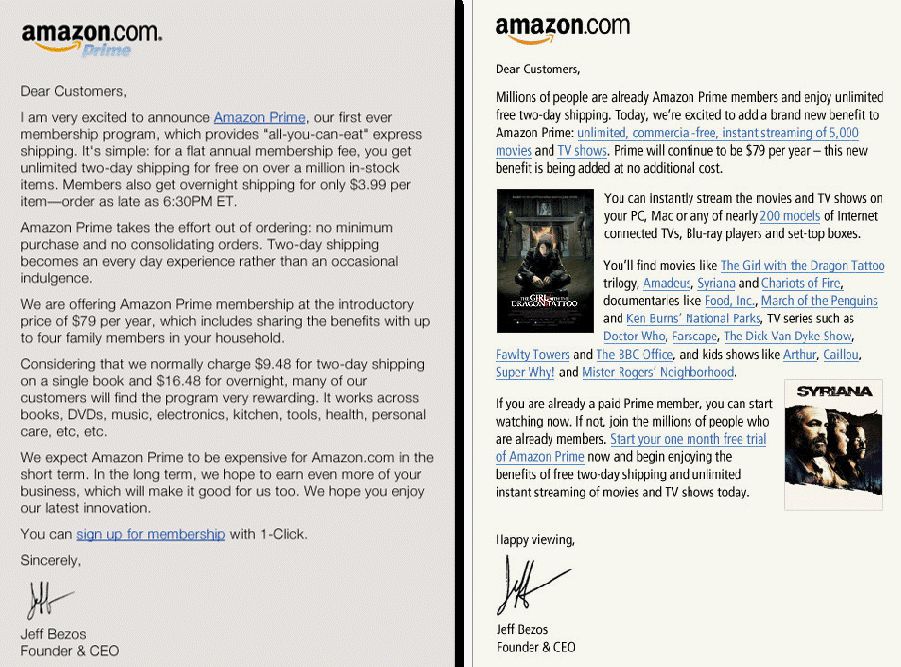 With it, Amazon single-handedly — and permanently — raised the bar for convenience in online shopping. That, in turn, forever changed the types of products shoppers were willing to buy online. Need a last-minute gift or nearing the end of a pack of diapers? Amazon was now an alternative to the immediacy of brick-and-mortar stores.

But the idea came with huge risks, and it spurred real tension inside Amazon. Some managers resented that their projects appeared to be deprioritized for a secret program they knew little about. Others feared that Amazon’s top customers were going to abuse the program and ultimately bankrupt the company with soaring shipping costs.

And if it succeeded, Amazon Prime was going to mean big, uncomfortable changes on everything from how managers were evaluated by superiors to how the company fulfilled orders and moved goods from point A to point B.

Bezos’s instinct, however, proved to be very right. Prime members spend more and buy more frequently than non-Prime members do. As of last year, Prime boasted more than 100 million paying members across the globe.

This is the story of how the greatest retail innovation of the internet age was created, in the face of sound logic and reason that suggested it might very well be disastrous. It’s also a story of how a frankly bland idea — fast shipping — was powerful enough to alter consumer psychology forever.

The story is told by the rank-and-file employees and the top company executives who built Prime. Their words have been edited and condensed for clarity.

Back then there wasn’t a blind faith that every Jeff idea was going to be a home run. And so there was a lot of pushback. Very prominent people who are at Amazon today and in high positions told me, “You shouldn’t be allowing Jeff to do this,” and, ”This is setting a bad example for the company.”

The “this” in question was a secret Amazon project that went by the code name Futurama — what would eventually become Amazon Prime. And it started, in part, with a software engineer’s frustration that Amazon’s free-shipping offer — then called Super Saver Shipping — was annoyingly complex, both on the backend and to shoppers, who were required to hit a $25 minimum with each order to qualify for the perk, and then wait eight to 10 business days for their delivery.

I’m a one-click addict. I hate having to go through the order pipeline and choose everything again and again and again. And … I couldn’t use one click with Super Saver Free Shipping.

I kind of have a perfectionist type of mentality. Things kind of irritate me and get more and more irritating over time and it was just really confirmed to me that I couldn’t make it better. So I threw out this problem to the group: “Wouldn’t it be great if customers just gave us a chunk of change at the beginning of the year and we calculated zero for their shipping charges the rest of that year?”

And we kind of had a small pause, a moment where we all looked at it as like, “Is Charlie crazy?”

So I took the time in that coming week to write up a short half-pager that outlined the basic situation.

Charlie’s idea was this all-you-can-eat shipping service. But the idea itself wasn’t about fast shipping. That was when Jeff took it a step further. I remember him saying at the time that nobody wakes up every day hoping that their shipping would be just a little bit slower.

Jeff said, “Well, hey, it looks like Super Saver Shipping is working really well for us. Can you bring me some similar ideas for faster shipping?” That was the first time, sometime in October 2004, that the idea kind of surfaced.

I brought what I thought were five or six decent ideas. …

I brought the team these ideas and we all looked at them and said, “Well, these are all kind of okay ideas but none of them make you fall in love.”

And then we proceeded to stitch almost all of them together … into a program you can love. We ended up with a half-price one-day, free two-day shipping with a membership fee.

We were excited. And I blurted out: “Well, we announced Super Saver Shipping on earnings day. Wouldn’t that be fun if we could do that now?” And as soon as the words were out of my mouth, I wished I could pull them back because this was a week and a half before Thanksgiving — Amazon’s most stressful time……Read more>>