With the most uncertain election in modern American history fast approaching, social networks are doing a final big push to get their users registered to vote.

The efforts align with National Voter Registration Day, which punctuates ongoing efforts from companies like Twitter, Facebook and Snapchat to get people to the polls, whether IRL or through mail-in voting.

Snapchat, which says it has helped 750,000 U.S. users get registered to vote, announced new voter-focused programming with an eclectic slate of celebrities that included Snoop Dogg, former President Obama and Arnold Schwarzenegger. The social network is also launching some new Snap Originals (the company’s short-form pieces of content) themed around the U.S. election. Those include a “Good Luck Voter!” miniseries by Peter Hamby and a special election-focused episode of “While Black with MK Asante.”

Star power aside, a Snapchat tool prompts users to make a plan to vote with friends and also allows them to request a mail-in ballot through the app itself. Any account featured on Snapchat’s Discover page can also embed the platform’s voter registration tool directly into their content. 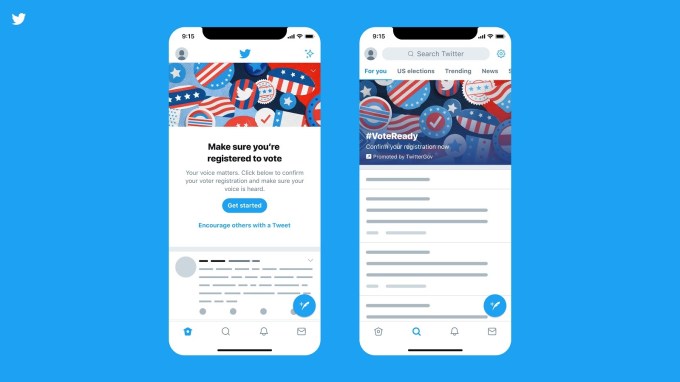 Twitter’s  own efforts also put voter registration front and center. On September 22, all U.S. Twitter users were sent a prompt asking them to register or confirm their voter registration through TurboVote. The prompt and an accompanying push alert were sent in 40 languages. The new reminders join the company’s existing voting info hub and its #YourVoiceYourVote campaign, which recruited popular accounts like Marshmello and Chrissy Teigen to promote a link to Vote.org’s registration check page along with original voice notes. Twitter also added new hashtag emoji linked to #NationalVoterRegistrationDay and #VoteReady…Read more>>
Source:-techcrunch
Loading...

END_OF_DOCUMENT_TOKEN_TO_BE_REPLACED

Apple’s iPhone 12 and iPhone 12 Pro are now available to pre-order from Apple.com and select carriers, specifically the 6.1-inch version