If you’d rather not think about how your life is locked in a dystopian web of your own data, don’t watch the new Netflix documentary The Great Hack.

But if you want to see, really see the way data tracking, harvesting, and targeting takes the strands of information we generate and ties them around us until we are smothered by governments and companies, then don’t miss the film, which premieres today on the streaming platform and in theaters. Ostensibly, it tells the story of the Cambridge Analytica scandal, but even if you know that sordid tale already, the film is worth a look. It uses the scandal as a framework to illustrate the data mining structures and algorithms that are undermining individual liberty and democratic society, one Facebook like and meme at a time.

“We became obsessed with trying to bring the POV of the algorithm to life,” explains codirector Karim Amer, who made the film with Jehane Noujaim, of the visual language the team developed for the doc. “How does the algorithm see us? If we could create a perspective for that algorithm, then we could help people understand our own fragility and the superstructure that exists around us, and how it’s constantly sucking and collecting your behavior.”

As a primer on the scandal, which dominated headlines around the world for two years after the election of President Donald Trump, the film is both succinct and thorough. It begins as news is breaking that Cambridge Analytica unethically scraped data from millions of Facebook users and used it to target vulnerable and impressionable voters in an effort to elect Trump and pass the Brexit resolution. Then it tracks the fallout. The film is bookended by professor David Carroll’s quest to get his own data back from Cambridge Analytica—a story WIRED told in depth—but focuses mainly on former CA employee Brittany Kaiser and her abrupt and somewhat baffling decision to turn against her employer.

Directors Amer and Noujiam Kaiser her starting a few days after she quit in 2018. At one point, she says the systems social media enabled and the firm relied on to influence democratic elections constitute “weapons grade” technology.

But it’s hard to control a weapon you can’t see, and that’s where The Great Hack offers even those very familiar with data tracking, and with the whole story of Cambridge Analytica, something powerful and new. It makes visible the normally invisible data of our everyday lives, and how it is harvested and weaponized against us. Through thoughtful narration and emoji-inspired animations, Amer and Noujaim reveal the digital detritus we leave in our wake whenever we send an email, look something up on a search engine, linger over an ad, make a purchase, or hit “like” on social media. And then, as alarming music swells in the background, the film uses that CGI to show how this data trail is being leveraged against us, every day: to sell us things, get us to vote or to stay home from the polls, to divide or unite us according to the whims of whoever has paid enough to take our digital threads and weave them into a web of their own desires.

The power of the animations is how real and familiar they seem. They don’t look like sci-fi. They look like what you see when you interact with your devices and platforms.

Amer says they intentionally kept the visual language fun. They wanted to point out that each little data point we create throughout our day seems innocuous on its own. “It’s kind of like emoji-land gone dark. It has to feel playful and kind of nice and light, and what could possibly go wrong?” he adds. “The inspiration was Fantasia, actually. The data is this dust that we’re exhausting, we’re releasing.” That dust, the film argues, is what Facebook and Silicon Valley, along with governments and firms like Cambridge Analytica use to exercise control over us.

Like dust, this lucrative and shady business is so hard to see in action—even as we all participate in it—that the easiest thing is to ignore it. Even people who are creeped out by uncanny ad targeting, and know that misinformation campaigns can and have eroded democracy, have a hard time actually imagining how it all works. That’s one reason, as Carroll points out in the film, why so many people believe their cell phone is listening to them. Your phone spying on your conversations is a more intelligible way to explain perfectly placed ads in your social feed than the actual answer: that your data trail has made your motivations and behavior predictable.

The visuals works perfectly in the middle of the documentary. when Kaiser and Carroll are both watching Mark Zuckerberg testify before Congress in early 2018. The directors give us a split screen to see their reactions, and splice in Carroll’s tweets as well as the reactions of the general public on social media using the animations. It’s in this moment that everything comes together: the quests of both main characters, the invisible structures of data and social media influence, and the creator of the platform that arguably kicked off the era and has the most power to change it. When Zuckerberg repeatedly blames Facebook’s privacy problems on the lone wolf that is Cambridge Analytica, Kaiser rolls her eyes. “Blame it on me, Mark, go for it,” she says, shaking her head.

Kaiser emerges as a frustrating if fascinating character. Though she started her political career as a volunteer for Barack Obama, she went on to write Cambridge Analytica’s first contract with the Trump campaign. In her capacity as an executive for Cambridge, she worked on the Leave.EU campaign and met with Julian Assange (a fact that later got her interviewed as part of the Mueller investigation). And though the directors show us deeply private conversations with her, why she chose to finally speak out against Cambridge Analytica is never made completely clear. She may not even know herself. But that’s part of what makes the journey of the film with her so intimate; as the cameras follow Kaiser, she’s grappling in real time with the consequences of what she has done.

“When we met Brittany, we didn’t know what to think about her. We questioned what her motivations were,” says Noujaim. “What we found, we believe, was that she was really looking for redemption, a way to understand what she had been involved in. And with her, we learn.” 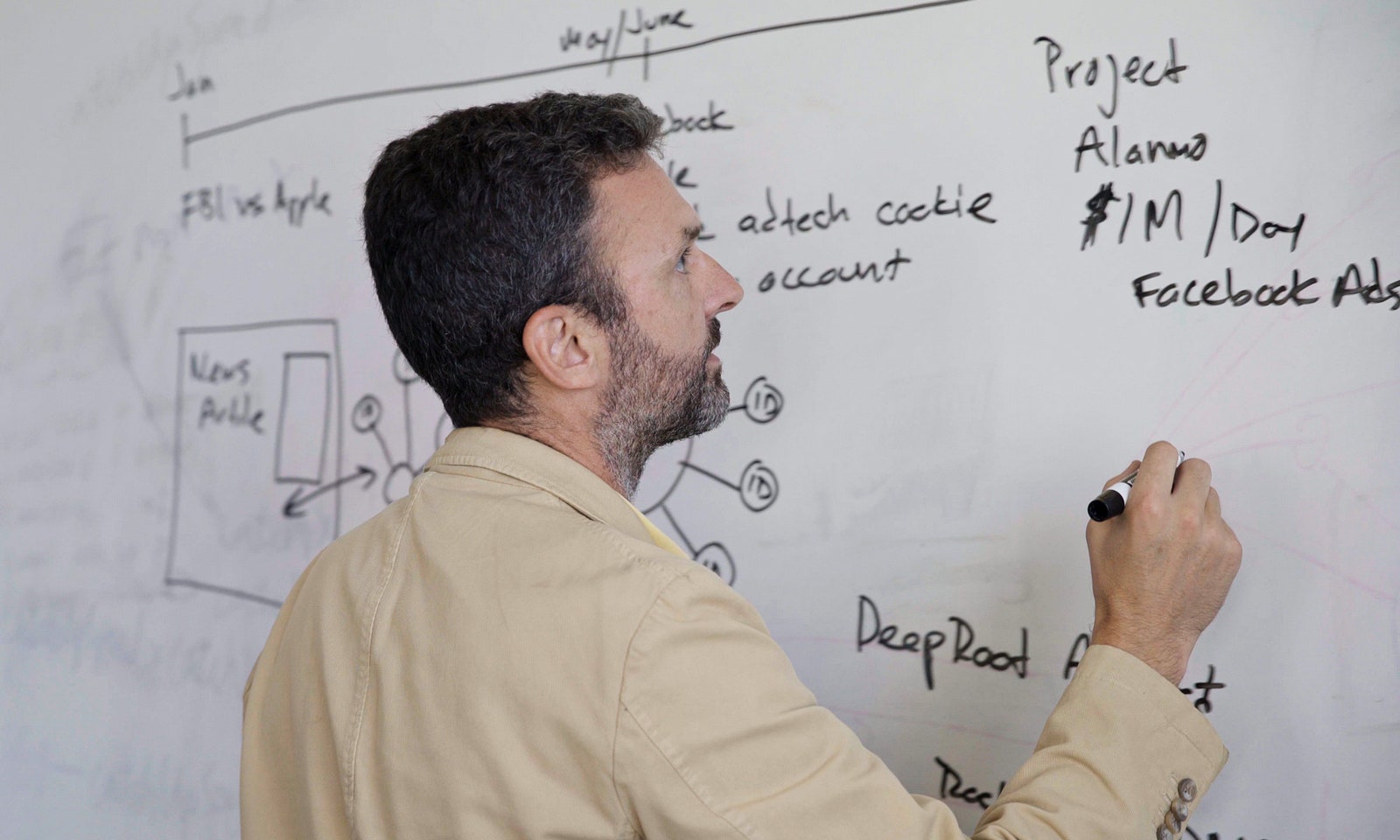 The most compelling moments come when Kaiser seems suddenly to understand that influencing voter behavior based on data tracking and psychology is not a morally neutral act. We watch as she finds troves of information on her work computer, information that seemed mundane to her at the time, but that show the underhanded tactics of the company. One particularly alarming find of hers is footage from a Cambridge Analytica sales pitch, in which the company touts how it suppressed voter turnout along racial lines in Trinidad and Tobago by creating a viral youth movement that seemed to those participating in it, and to outsiders, like an authentic, grassroots phenomenon. Instead, the pitch shows, it was a carefully calibrated social media disinformation campaign with the express intent of abusing existing racial tensions to achieve a certain electoral outcome.

What Kaiser seems to realize is the point the film drives home: that the now-defunct Cambridge Analytica was a symptom of a disease plaguing society, one that won’t be cured with the shuttering of a single data company. “Cambridge is really a vehicle to take us into the story of Facebook and Silicon Valley at large, and how that is what we actually really need to be focused on,” says Amer.

After watching The Great Hack, you’ll have a much better understanding of what data tracking, harvesting, and selling look like, and of how they’re deployed against individuals, communities, and nations. In that way, The Great Hack is a modern horror story. The villain is Cambridge Analytica, yes, but also Facebook, and all the systems that let people become manipulated by the digital psychological clues they leave through their lives. It’s terrifying because it’s true.