Today, NASA unveiled its designs for future spacesuits that astronauts will wear during trips to the lunar surface. The suits are still in development, but NASA claims they’ll be ready to keep astronauts alive in space by 2024 — the space agency’s deadline to return humans to the Moon.

Known as the xEMU, this next generation spacesuit builds on the design of suits already worn by astronauts on the International Space Station. These new ensembles are upgraded so that astronauts wearing them can live and work on the Moon. During a demonstration at NASA headquarters on Tuesday, a spacesuit engineer showed off the flexibility of the suit, proving it can twist and bend at the waist, unlike suits of the past. The suit’s legs are also pliable, allowing wearers to walk on another world — a capability astronauts don’t currently need in Earth orbit.

NASA claims that the xEMU can fit a broad range of astronaut sizes, too. “We can fit anywhere from the first percentile female to the 99th percentile male,” Amy Ross, a spacesuit designer at NASA, said during the demonstration. That’s been a struggle with the current spacesuit design, which only has a few different options in terms of sizing. Such size limitations restrict who can go on spacewalks on the ISS, a problem that NASA encountered in March when it had to postpone its first all female-spacewalk due to spacesuit sizes and availability. NASA says the xEMU will be built with many different sized parts, as well as an adjustable feature in the shoulder that will make it easier for various people to wear the suit.

The xEMU design builds upon lessons learned during the Apollo missions to the Moon. For one, its built to withstand lunar dust, which is incredibly fine and turned out to be a major complication for the Apollo Moon walkers — sticking to everything and getting into equipment. To keep the dust at bay, the xEMU doesn’t have zippers or cables, and its main components are sealed. NASA claims the suit can also withstand the extreme temperatures of the lunar surface, operating between 250 and minus 250 degrees Fahrenheit. 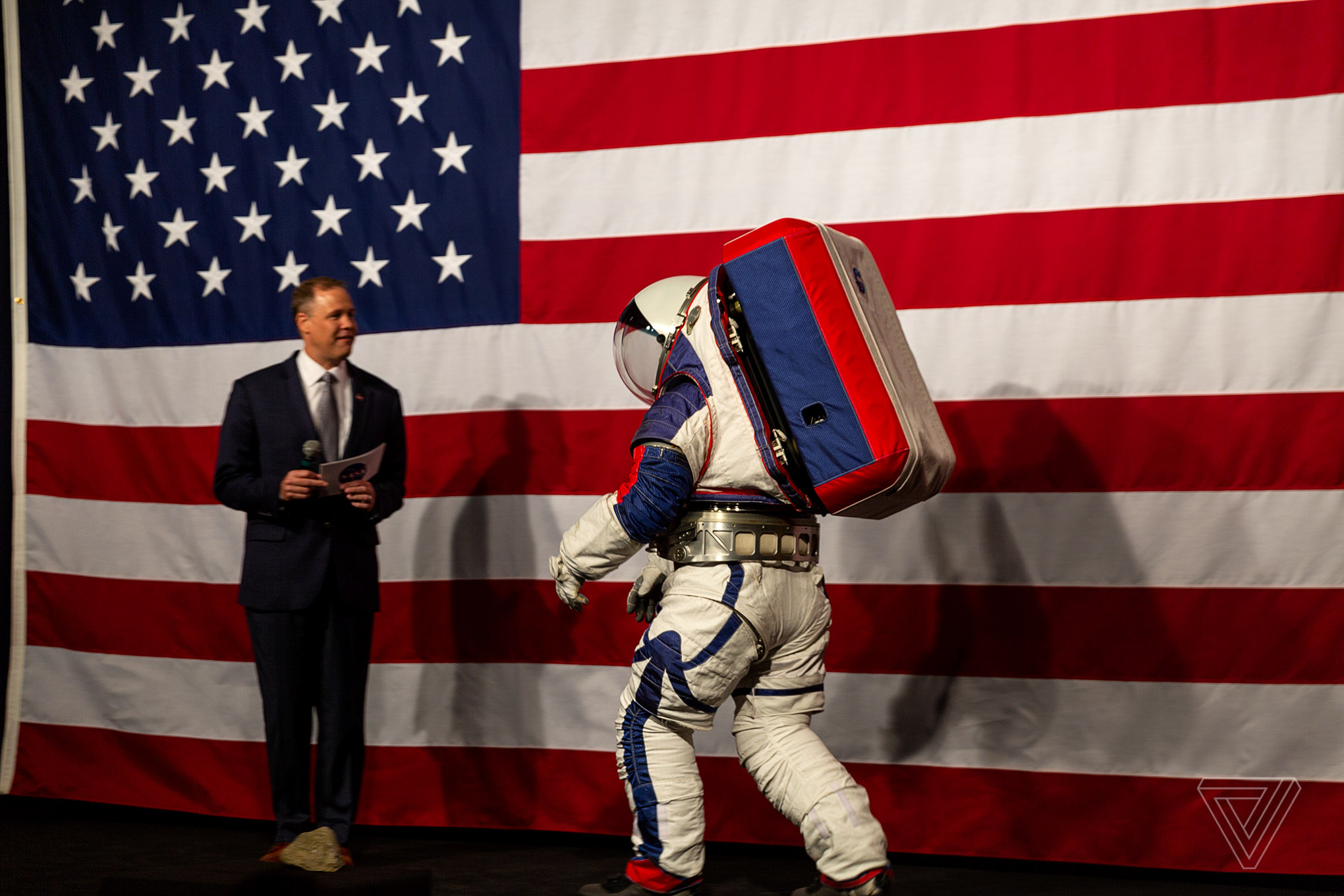 While the prototype of the xEMU on stage at NASA headquarters looked impressive, there’s still quite a lot of work that needs to be done before these suits are ready for actual Moon walks. NASA has another major review of the spacesuit design planned for 2021. After that, the xEMU will go through a battery of tests including sticking it in a vacuum chamber to simulate the environment of the Moon.

If that goes well, it’ll be time to send the xEMU to space. NASA plans to launch one of these spacesuits to the International Space Station within the next two years, where an astronaut will don the ensemble for a spacewalk. However, if NASA misses this in-space test for some reason, it doesn’t mean they can’t send the xEMU to the Moon. 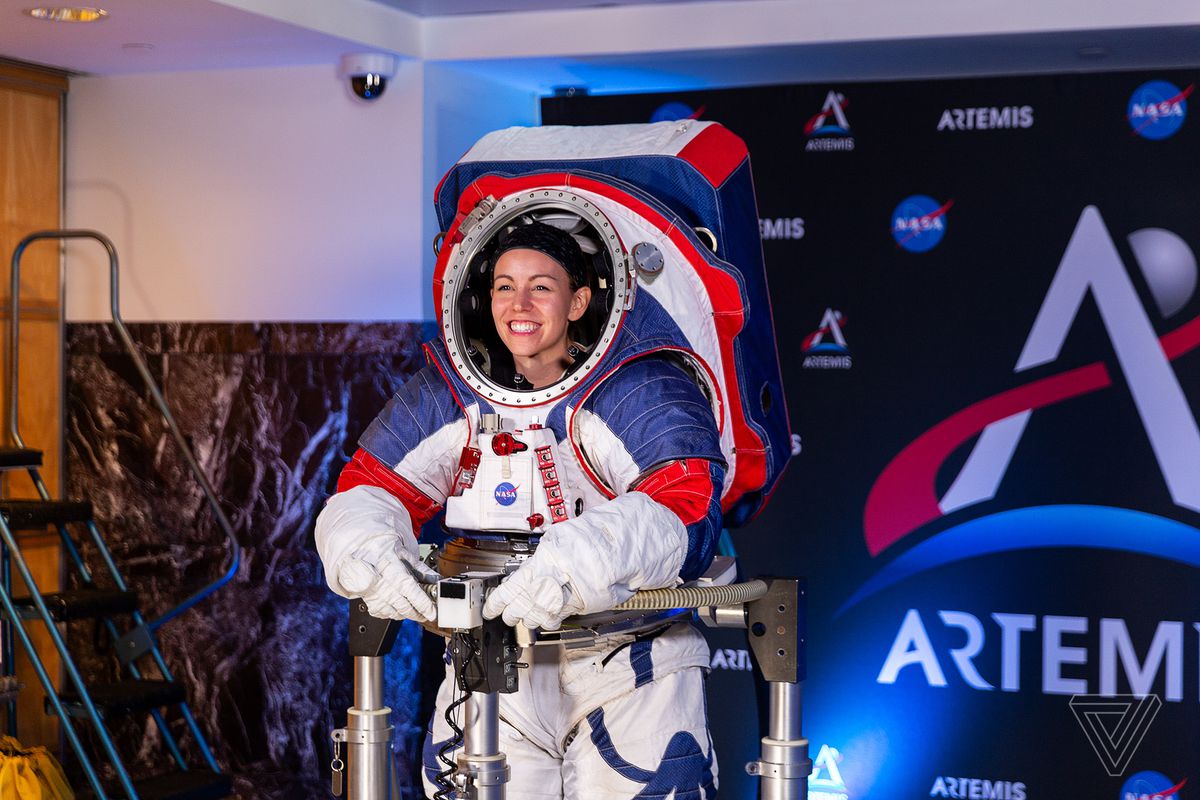 “We will try to get the suit onboard the space station as fast as we can, to get data before we go down to the Moon, but it’s not a requirement,” Chris Hansen, chief engineer of the International Space Station at NASA, said during a press conference on the suits. “We’re comfortable with the design enough that if for some reason one of those schedules slips, it’s not required that we go to the space station.”

NASA says it is building two xEMU suits for the first planned trip to the Moon in 2024. After that, the agency wants to hand production of the suit over to the commercial space industry. The space agency recently put out a request for information from commercial companies, asking for input on how to best transition the suit to a future contractor. “We don’t want to be in the suit production business,” Hansen said. “That’s much better left to industry. We want them to innovate. We want them to find out how to build our suits cheaper, faster, and provide those suits to commercial entities.”

Before all that can happen, NASA has to get the money it needs to pull of its ambitious lunar mission. The Trump administration requested an additional $1.6 billion for NASA for next year to accelerate plans to return humans to the Moon, but it’s unclear if Congress will appropriate those funds for the agency. In proposed funding bills for next year, that money isn’t included. One reason that funding is so important is that the spacesuit’s design is also dependent on the type of lander that NASA chooses to send people to the lunar surface; if NASA doesn’t have the money to provide to companies to build landers, then the spacesuit production schedule could get hairy.

“It’s really going to come down to when it comes time to contracts for the [landers]… is when the bulk of the money is really going to need to be provided,” Marshall Smith, director of human lunar exploration programs at NASA said during the press conference. “That’ll be toward the end of the year before we kind of run into a budget issue if we don’t get funded at the levels we think we need.”