Nearly 10 years ago, YouTube started displaying a banner to Internet Explorer 6 users, warning that support for Microsoft’s browser would be “phasing out” soon. It was a message that appeared on all YouTube pages, at a time when IE6 users represented around 18 percent of all YouTube traffic. Frustrated by supporting the aging browser, a group of YouTube engineers had hatched a plan to kill Internet Explorer 6.

“We began collectively fantasizing about how we could exact our revenge on IE6,” reveals Chris Zacharias, a former Google and YouTube engineer. “The plan was very simple. We would put a small banner above the video player that would only show up for IE6 users.” A group of engineers implemented this banner, knowing that most YouTube employees using the company’s staging environment wouldn’t even see it. At the time, Google had acquired YouTube a few years prior to the IE6 banner and the video sharing site hadn’t really fully adapted to Google’s infrastructure and policies.

YouTube engineers had created a special set of permissions called “OldTuber,” so they could bypass Google’s code enforcement policies and make changes directly to the YouTube codebase with limited code reviews. Zacharias and some other engineers were granted OldTuber permissions, allowing them to put the banner in place with very little oversight. “We saw an opportunity in front of us to permanently cripple IE6 that we might never get again,” admits Zacharias. 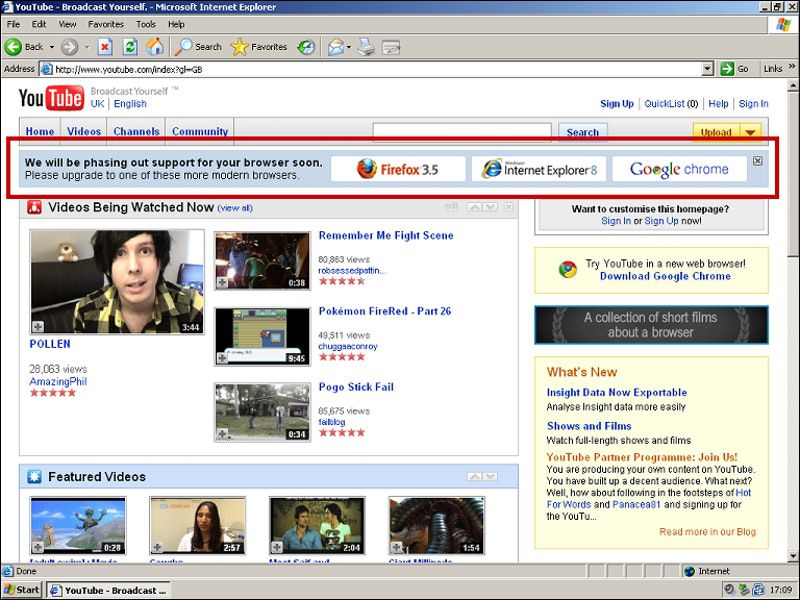 The banner appeared in July 2009, and the press coverage immediately approved of Google’s push to kill off Internet Explorer 6 support on YouTube. “The first person to come by our desks was the PR team lead,” explains Zacharias. Every major tech publication was asking why YouTube was threatening to kill of IE6 support, at a time when the browser was still used frequently. “We eagerly told them [PR] everything about what we had launched and helped them craft the necessary talking points to expand on the narrative already established by the media.”

Two Google lawyers also wanted to know why YouTube had the banner in place. “They immediately demanded that we remove the banner,” reveals Zacharias. The lawyers were worried that Chrome was being promoted first as an alternative browser, prompting fears about EU regulators looking for anti-competitive behavior. But it turns out the YouTube engineers had programmed the banner to randomly display browsers like Firefox, Internet Explorer 8, and eventually Opera, and they demonstrated this to the lawyers. “Content with the demonstration, the lawyers quickly retreated back to their desks without any further concerns,” says Zacharias.

The banner spread to other Google properties. The Google Docs team added a similar message warning about IE6 support. “One of their engineers testing in IE6 had noticed the YouTube banner pretty shortly after it went live and immediately took it to their manager as evidence as to why they should do the same,” explains Zacharias. Google internal chatter centered on the Docs team adding the IE6 banner, so the original YouTube engineering team “somehow bypassed detection as the originators of the IE6 banner inside of Google.”

The result was a massive dip in Internet Explorer 6 traffic to YouTube. “Within one month, our YouTube IE6 user base was cut in half and over 10 percent of global IE6 traffic had dropped off while all other browsers increased in corresponding amounts,” says Zacharias. “The results were better than our web development team had ever intended.”

YouTube engineering management eventually realized what had happened, but it was too late and they “begrudgingly arrived at the conclusion that the ends had justified the means.” The rebel YouTube engineers succeeded with their secret plan to kill Internet Explorer 6, and by April 2012 IE6 usage had dropped below one percent in the US. Even Microsoft was celebrating IE6’s death.

Chris Zacharias’ full story is well worth the read for all the full details on this unusual plot to kill IE6.